The latest recognition was announced on October 20 at the Associated Builders and Contractors-Connecticut Chapter’s annual Excellence in Construction awards event, where the project earned a merit award in the special projects category.

Earlier this year, the Connecticut Building Congress recognized the project with a merit award, and Engineering News Record will be bestowing a merit award at its awards event on November 19 in Boston.

The cultural entertainment venue has existed, in one form or another, for more than 100 years on a prime street corner in downtown Fairfield, CT. Opened as a vaudeville theater in the 1920s, the theater lived through numerous transformations over the years: Traditional theater, independent movie theater, chain movie theater, until 2010, when then-owner Lowe’s Theaters closed the facility.

Since then, the 22,000 sf building had been quietly mouldering behind locked doors while community leaders, townspeople, and area businesses talked about ways to revitalize this beloved landmark and the downtown area along with it. Ultimately, Kleban Properties, a Fairfield-based development firm, acquired the property, with a plan to gut the interior and preserve the structure while offering a “white box” space ready for commercial lease.

KBE Building Corporation of Farmington, Connecticut was brought on board to plan and manage the renovation, working with J.P. Franzen Architects Associates, located in Fairfield, CT. The interior was stripped down to the studs and the exterior façade restored.

But just as the interior fit-out work was getting underway, nearby Sacred Heart University (SHU), approached the owners with a proposition: Let SHU lease the space for ten years to use as a community setting for its highly regarded theater program, as well as provide film and other entertainment opportunities to the community.

And in that moment, the project changed from a relatively straightforward “white box” project to a comprehensive custom fit-out to support theatrical and multi-media performances.

The expansion provides a new and larger stage, a balcony with a skybox, a renovated front office and new digital technology. The original stage and proscenium arch were preserved and converted to green room and office areas. The existing seating was replaced with 446 stadium-style seats. The scope of work included all new building systems, new finishes throughout, mezzanine gathering area, reception, ticket booth, green room, and new neon marquee. 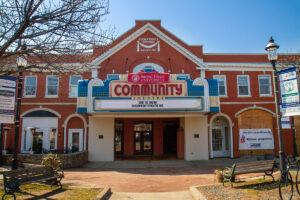 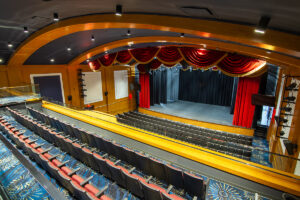 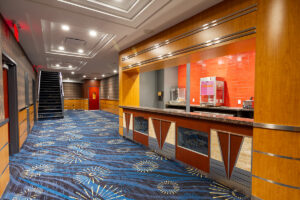 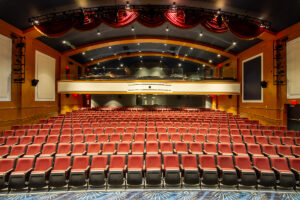